On 13 January 2016 the International Accounting Standard Board issued IFRS 16 Leases, the new accounting standard on leasing. The new standard eliminates the distinction between finance and operating leases for lessees and requires recognition of lease liabilities for all leasing arrangements.

This contrasts with the existing accounting model for leases which requires lessees to classify their leases as either finance leases or operating leases and account for those leases differently. As a result lessees in an operating lease is not required to present important information about significant assets and liabilities arising from such leases.

IFRS 16 is effective for annual period beginning on or after 1 January 2019. A company can choose to apply IFRS 16 before that date but only if it also applies IFRS 15 Revenue from Contracts with Customers.

Under the new model the underlying principle reflects that, at the start of a lease, the lessee obtains the right to use an asset for a period of time and has an obligation to pay for that right. Consequently the new standard requires lessees to recognise assets and liabilities arising from all leases on the balance sheet, subject to certain exemptions for short term (leases with a lease term of 12 months or less) and small asset leases (where the underlying asset has a low value when acquired).

As the new standard considers all leases as financing arrangements, a lessee would always recognize and present in the income statement amortisation of lease assets separately from interest on lease liabilities.

Impact on the balance sheet

Impact on the income statement

The impact on income statement of the new model will depend on the significance of leasing to the lessee and the length of its leases. EBITDA is likely to increase compared to the amounts reported today because, a lessee will present the implicit interest component operating lease payments as part of finance costs whereas, today, the entire lease expense is included within operating costs.

The net profit, however, is likely to decrease because interest expense is typically front loaded as the combined effect of amortization of lease asset and interest on lease liability is higher in the earlier years of a lease than in the later years and vice-versa. Over the lease term, the total amount of expense recognised remains the same. 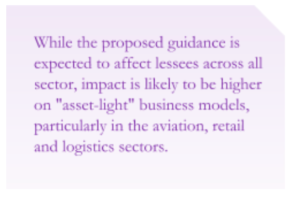 Impact on the cash flow statement

Consistent with the balance sheet, the new model reduces operating cash outflows, with a corresponding increase in financing cash outflows for principal repayments, compared to the amounts reported today to reflect the economics of a financing arrangement

The lessor’s accounting will not change as the difference between finance and an operating lease has been retained. However, it requires a lessor to provide some additional disclosures to enable users of financial statements to better evaluate the uncertainty of cash flows associated with the lessor’s leasing activities. The enhanced lessor disclosure requirements are as listed below:

Although both Boards require recognition of lease liabilities for all leasing arrangements on the balance sheet, the Boards have diverged on the recognition of leases in the lessee’s income statement. While the IASB’s model requires all leases to be presented in a manner similar to today’s finance leases, the ASC 842 has a dual model that requires finance leases to be accounted in a manner similar to financed purchases (i.e. right-of-use asset is amortized to amortization expense and interest expense is recorded in connection with the lease liability) and operating lease expense is recorded in a single financial statement line item on a straight-line basis over the lease term. This is achieved by measuring the amortisation of the lease asset each period as a balancing amount (i.e., accounting plug), calculated as the periodic straight-line lease expense (calculated in a manner similar to current operating leases) minus interest on the lease liability for the period. Therefore, for the operating leases the amortisation of leases asset will be inverse of interest on lease liability i.e. it will lower in earlier years and will increase in later years so that the charge on income statements reflect straight-line pattern.

Open chat
Need Help?
Hello, How can we help you?
Powered by